Around 1720, the Rosenau family left their homeland Austria to move to the southwestern bank of the Großensee. The existence of the village Großensee was first documented in 1200 AD.

A farmhouse was erected on the terrain of today’s agricultural holding, which burned down around 1860. The reconstructed main building was expanded further by the addition of buildings and stables in 1922.

With its original acreage of close to 100 ha, the livelihood of its operators and their domestic workers was secured until 1977.

As was typical for these times, the farm specialised on a wide range of products until 1955. This included pig farming, the rearing of dairy cattle, as well as the cultivation of different feeding crop, grains, and grasslands. During the post-war years, this acreage decreased to about 60 ha.

Maps were disabled by the visitor on this site. Click to open the map in a new window. 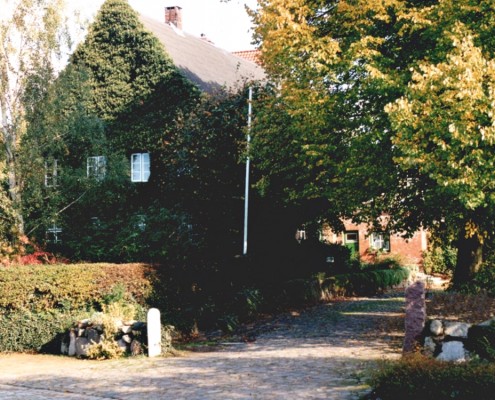 Under Leonhard Hundsdorfer and Anneliese Hundsdorfer-Rosenau the farm was modernised fundamentally and oriented towards milk production with the classic “Holstein Schwarzbunt” – the Holstein lowland cattle. On our farm, the principles of today’s dairy farms were implemented step by step as early as the 70s.

Due to private and economic circumstances, the farm was restructured again in 1980.

For two decades, the breeding of Holstein horses became the main source of income. Particularly the line 890 produced numerous successful jumpers, who won awards and medals in national, as well as international horse jumping.

This site uses third-party website tracking technologies to provide and continually improve. I agree and may revoke or change my consent at any time with effect for the future.